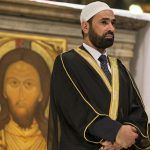 Following the vicious murder of beloved Reverend Jacques Hamel in an ISIS-related attack in Northern France last week, more than one hundred Muslims attended Catholic mass in churches throughout France to show their sorrow and support. “I thank you in the name of all Christians,” said Rouen Archbishop Dominique Lebrun as he addressed the Muslim mourners. “In this way you are affirming that you reject death and violence in the name of God.”

“Being united is a response to the act of horror and barbarism,” commented Nice’s top Imam, Otaman Aissaoui.

“I’m a practicing Muslim and I came to share my sorrow and tell you that we are brothers and sisters,” said a woman named Saida who attended a church memorial service in Paris. “What happened is beyond comprehension.”