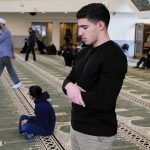 As of last spring, 540 undergraduate students who attend Benedictine University in Chicago identify as Muslim. That’s roughly 24% — a pretty high number for any university, but especially one that is a notable Catholic institution.

According to the Chicago Tribune, “that percentage is rising and reflects a trend at other Catholic institutions of higher learning. It’s a result in part from the church’s effort to define its education as accepting all faiths in hopes of serving everyone in the search for what the president of the national Catholic association of universities called ‘transcendence and meaning.’”

To accommodate its growing Muslim student population, the university has brought on a Muslim faith adviser, Ali Yurtsever, who is president of American Islamic College in Chicago and president of the Rumi Forum, a nonprofit that promotes interfaith and intercultural dialogue (and prior to this, was a math professor at Georgetown).

Benedictine President Michael S. Brophy says Mr. Yurtsever is “worth his weight in gold” for his ability to help both Muslim students and the administration. Mr. Brophy says that welcoming Muslim students aligns with the school’s value “to welcome the stranger as if they were Christ.” Abdul Rahman Damra, a student studying health science, concurs saying that he thinks “the way [the university] receives Muslims is very welcoming. Benedictine caters to the needs of Muslims more than most schools do.”

“Typically, we find they are very devout students,” says Mr. Brophy. “Not only to their faith, but to their studies.”