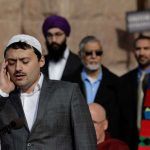 The Catholic clergy community is reaching out to the Muslim community as a show of “public support” stemming from concerns expressed by U.S. bishops in the wake of “a serious uptick in violence against American Muslims … to make sure that they are sensitive to what is going on in the (Muslim) communities,” says Anthony Cirelli, associate director of the Secretariat for Ecumenical and Interreligious Affairs at the U.S. Conference of Catholic Bishops.

Mr. Cirelli reports that interfaith dialogues have been underway since early last year, involving both Muslim and Christian scholars and religious leaders, and have focused mostly on academic discussions and comparisons of their respective religious texts which has resulted in improved understanding among Muslim and Catholic leaders on a theological level.

“The bishops’ priority at the moment is to listen to (Muslims’) concerns, their fears, their needs … and so discern how we as Catholics can help them achieve their goals of full participation in their communities,” says Anthony Cirelli, associate director of the Secretariat for Ecumenical and Interreligious Affairs.