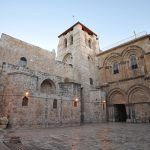 The Church of the Holy Sepulchre in Jerusalem is one of the most sacred places for Christians, many believe it is the location of Christ’s tomb but alas, it is in great need of repairs due to smoke and moisture which have damaged the structure’s mortars. Restoration is said to cost an estimated $3.4 million dollars but good news just came in — King Abdullah II of Jordan has personally pledged to help fund the project.

Bishop William Shomali, the Latin Patriarchal Vicar in Jerusalem, has praised King Abdullah for his act of benevolence. “This is excellent news,” said Bishop Shomali. “This decision shows the kindness of the king toward Christians and his constant concern to preserve the heritage of Christianity, including his role as guarantor of the holy places, Christian and Muslim, Jerusalem, according to the Wadi Araba agreement.”