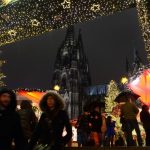 In response to anti-Muslim demonstrations by Pegida as well as the growing Islamophobic rhetoric in the face of the refugee crisis, the Christian clergy in Germany are standing firmly in solidarity with Muslims. The dean of the Cologne Cathedral, Norbert Feldoff spoke with Reuters about the Patriotic Europeans Against the Islamicization movement, also known as Pegida, “Pegida is made up of an astonishingly broad mix of people, ranging from those in the middle of society to racists and the extreme right-wing. By switching off the floodlighting we want to make those on the march stop and think. It is a challenge: consider who you are marching alongside.” In response to the anti-Muslim protests, the renowned church plans to switch off the lights as a gesture of disapproval.