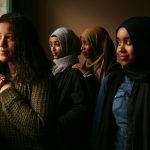 Fifteen-year old Zion Lourdes Perez is co-founder and president of the Muslim Student Association at Franklin High School located in Seattle. Though Perez was raised Catholic, the teen says she wanted to understand Islam on a deeper level so she started to wear the hijab (religious head-covering), and as a result, feels a whole new respect for Muslim women. “They really have to be strong,” says the teen. “It takes tremendous courage to walk around wearing hijab.”

In recent years, the number of Muslim youths at Perez’s high school has grown, but many non-Muslim students still have little knowledge of the faith and culture. The recent anti-Muslim sentiment hitting the country makes the situation even more confusing for non-Muslim students – which is what motivated Perez’s interest.

“There wasn’t any place where [Muslim students] could connect with each other,” says the teen. “And I didn’t know much about Islam except what I saw in media. To accept other groups and cultures you have to understand them.”