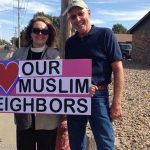 On October 14th, law enforcement in Wichita, Kansas announced the arrest of three men charged with a domestic terrorist plot to bomb an apartment complex where many Somali immigrant families lived.

In a show of support for the local Muslim community, Reverend Denise Pass, pastor for the Presbyterian Church in Garden City, organized a rally near the apartment complex. “When I heard this tragic news, it came to my mind that we – as members of this community and as Christians – should support and protect the local Muslim community,” says the Reverend. “The actions of few racist individuals should not be taken to represent the whole community, just as the Muslim community should not negatively labeled or held responsible for the actions of the very few terrorists who happened to be Muslims.”

Mursal Naleye, who came to the U.S. from Somalia in 2010, says he was heartened by the support. “We are really thankful for everyone who came out supporting and protecting us, the police, the FBI and the local community.”