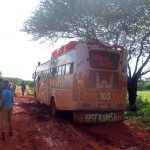 A large number of Kenyans are raising donations for the family of a slain Muslim teacher who died following the al-Shabab bus attack that hit Kenya in December 2015. Salah Farah was riding the bus in Mandera when the terrorist group raided the bus. The group reportedly asked the riders to split into groups of Muslims and non-Muslims. Farah was one of many Muslims who insistently refused to separate from Christians, eventually leading him to be shot. He died a month later from gunshot wounds leaving behind a pregnant wife and four children. Kenyans have dubbed him a hero on social media. They launched a campaign to raise funds for late Farah’s family using the hashtag #HeroSalah.

Abdullahi Derow, who has been recording the impact of the campaign, was overwhelmed by the reaction it received, “May Allah bless you,” he said. “This kind of compassion is a great sign that humanity exists.”