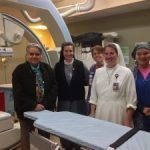 When they made St. Louis their permanent residence in the 1970s, Drs. Noor and Parveen Ahmed picked up the mantle of interfaith work that had been put in place by previous Muslim immigrants. The couple stepped into a regular meeting of Christians, Jews, Baha’is and Muslims. The group became so close they decided to visit Jerusalem together in 2007, as the city holds such importance for all four faith groups.

“We spent 10 days together,” Dr. Noor Ahmed said. “We came to know each other better than we did before.” The group also had a social service commitment, such as distributing food and clothing at Christmas to the needy. This interfaith understanding pervades the couple’s professional lives as well. Dr. Parveen Ahmed worked for the American Red Cross as the medical director of blood services.

Dr. Noor Ahmed, a long-time plastic and reconstructive surgeon, received appreciation awards for his civic engagement from both hospitals he works for. St. Anthony Hospital recognized him for volunteering to fundraise for a cardiac Cath lab that cost $877,000. Sister Mikela Meidl, Executive Vice President of OSF Healthcare, said a donor offered a significant amount of money if a matching donation could be procured in a very short amount of time.

“Dr. Ahmed stepped forward and said he would like to support the process,” she said. He has also set up free skin cancer screenings at Alton Memorial Hospital that services 30 to 40 patients a month, which made him the first-ever recipient of the institution’s humanitarian award. “He’s been a mainstay in the community for a long time,” said David Braasch, president of Alton Memorial. “I’m just amazed by how much he is dedicated to his community.”

The Ahmeds have also committed themselves to the St. Louis Muslim community. Dr. Parveen Ahmed was a trailblazer: She became the chairman of the local masjid board of trustees in a time when many women weren’t in leadership positions in Muslim institutions. Dr. Noor Ahmed devoted himself to opening the Iqra Library at the Islamic Foundation of Greater St. Louis. “We like the (St. Louis) community,” said Dr. Parveen Ahmed. “It’s a large city but also a small community where Muslims know each other and get involved in interfaith activities.”