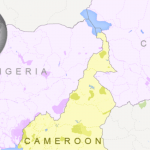 Photo Credit: Daily Trust
Original article published in the Voice of America on 01/19/2016

Among the vigilantes are Ibrahim Moctar, a Muslim youth leader, and Jacques Mabali, 55, a member of the Evangelical Lutheran Church of Cameroon. Ibrahim Moctar tells Voice of America that he prays for God to save Cameroon from Boko Haram and to end terrorism. He said that he has members of his family that are Christian. And Jacques Mabali comments that it is his duty as a Christian to defend his country from violence and to protect the Muslim community.