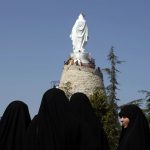 Catholics around the world honor the Virgin Mary during the month of May, in a practice dating back to the 13th Century. But they are not the only faith that greatly admires the Virgin Mary – enter Islam. Built in 1908, The Shrine of Our Lady of Lebanon, draws Muslim visitors to the religious site, located in Harissa, Lebanon.

“All of [the Muslim visitors] have big respect for Mary,” says Father Younen Obeid. “This respect stems directly from the Quran, the holy book of Islam, which references Mary 37 times — even more occasions than the Bible. The 19th chapter of the Quran is in fact named after Mary and tells the story of her life and how she came to give birth to Jesus, though Islam does not hold the belief of Jesus’s divinity.”

Randa Youssef, a Muslim woman from Beirut, says that she likes to come to the shrine to ask for forgiveness. “I hope she listens to us to give our prayers to God,” comments Ms. Youssef.