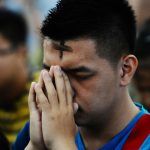 McDonald’s, carbohydrates, chocolate, and bread are some of the things these Muslims are giving up for 40 days. #Muslims4Lent is a social media campaign initiated by Muslims on Twitter in solidarity with Christians during the Catholic season of Lent. Christian observers of Lent practice restraint by giving up certain luxuries, guilty pleasures, or vices for 40 days as a form of repentance. Muslims tweeted pictures of themselves announcing what they are planning to abstain from for the duration of Lent.

Basil Riche, the American Muslim who started the campaign said that #Muslims4Lent was well-received in the Christian community. “We have seen Catholic Priests reaching out to express their love and support for this initiative, other Christians telling us how special it is to them personally that we are pushing such an active show of support and interfaith tolerance.”