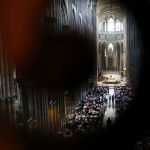 Last week, beloved Reverend Jacques Hamel was viciously murdered in an ISIS-related attack in St.-Étienne-du-Rouvray, a small countryside village in Normandy France which, according to local historian Pierre Ménard, has “always been a melting pot of nationalities and immigrants.”

For years, Muslims and Christians in town have enjoyed being neighbors, learning and depending on one another. According to the New York Times, this “exchange served as a reminder that long before Father Hamel was killed, he and many others from both faiths had worked together to build bonds. In fact, the only mosque in St.-Étienne-du-Rouvray was built on land adjacent to one of the town’s churches after the church sold it for a symbolic price of one euro.”

Sister Marie Wandrille worked with Reverend Jacques Hamel for twenty years and says of the beloved man of cloth: “He was so attached to interreligious dialogue. He and I used to give tutoring classes for children after schools. Muslims and Catholic children used to come to our parish every day.”