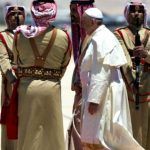 There seems to be a common misconception that the Middle East is generally intolerant towards Christians. However, in this story, Jordan Denari disputes this notion citing her own experience, an American Christian, living in Amman, Jordan. In this piece Denari recalls the time she celebrated Easter with Christian and Muslim Jordanians:

“On Easter Sunday in 2014, I accompanied my elderly Muslim neighbor, Najah, to the home of her Christian friend, Leila, with whom she celebrates the holiday each year. Najah brought Leila a t-shirt with a poem printed across the front. The lines of verse, written by the Jordanian poet Mustafa Wahbi al-Tal, known as Arar, speak of Jordan as a blessed land where “no one is a stranger,” and where the clanging of church bells and the echo of the call to prayer come together. After we shared a meal, Leila brought out a rug and scarf for Najah so she could perform her prayers. ”

Denari went on to say, that acknowledging present and past realities of Christian-Muslim coexistence does not dismiss the threat Christians do face by extremist groups such as ISIS. However, it is very important to present the truly nuanced reality instead of resorting to simplistic and reductionistic statements, “a narrative of hostility and persecution confirms stereotypes about the Middle East while also playing into the American church’s messaging about threats to religious freedom in this country. It ignores the reality in places like Jordan, and thus only confirms for the audience the frightening picture of the Muslim world they’d already envisioned. It’s important to keep separate the very real horrors inflicted by ISIS from the ordinary encounters among Muslim and Christian communities, encounters that demonstrate tolerance and peaceful co-existence.”