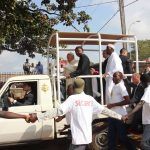 During his tour of the war-ridden Central African Republic, Pope Francis stopped by a Muslim neighborhood where people greeted the religious leader with hand-made signs declaring “Yes to inter-religious dialogue.”

Pope Francis addressed a crowd of worshippers inside a local mosque saying, “Christians and Muslims, we are all brothers. Everybody who says he is a believer is a man or woman of peace.”

The country is involved in an ongoing civil war between the Seleka group (which aligns itself with the country’s Muslim minority population) against rebel anti-Balaka fighters (who associate with the Christian majority). Muslims account for around 15% of CAR’s population of 4.7 million, and many are trapped in isolated villages for security reasons.