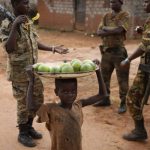 For decades, Muslims and Christians lived together in Bambari and throughout the Central African Republic, but in the past few years, sectarian conflict has ripped the country apart, displacing one-million people (half of which are now refugees in neighboring countries). The Ouakra river divides the city, literally and also by faith — on one side of the river are Muslims and on the other side, Christians.

Established last year, The “Voice of Ouaka” is the region’s only functioning radio station serving as a vital mouthpiece — without it, rumors were quick to spread and fueled lingering tensions. “The community told us that they wanted to hear the voices of Bambari better represented,” says Adja Khaltouma Boulama, President of Voice of Ouaka’s managing committee. “I wanted to do this for my country… so we could put rumors to rest and cultivate social cohesion between us, between Christians and Muslims, so that peace could return.”

“The radio hopes to be like a kind of bridge over the river that could help people to be reconciled,” says station spokesperson, Mathias Manirakiza.