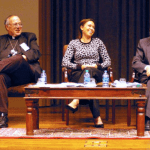 In a keynote address last month at the University of San Diego’s Joan B. Kroc Institute for Peace, Bishop Robert W. McElroy encouraged his Catholic constituents “to recognize and confront the ugly tide of anti-Islamic bigotry” in the United States, and to actively seek personal relationships with those of the Muslim faith. “Religious bigotry thrives in an environment of social isolation. Encounter, which leads to friendship and, thus, deeper understanding, is the most important antidote to prejudice and bigotry.”

The speech took place at the first national Catholic-Muslim dialogue which also featured a keynote speech by Sayyid M. Syeed, national director of the Islamic Society of North America’s Office for Interfaith and Community Alliances, who talked about the state of Catholic-Muslim relations, from a Muslim’s standpoint.

Before concluding his speech, Bishop McElroy praised Islam’s respect for “the peoples of the Book” (a reference to Judaism, Christianity and Islam, each of which trace their lineage back to Abraham), and implored an importance of Catholics and Muslims working together toward a peaceful future and an end to religious conflict.