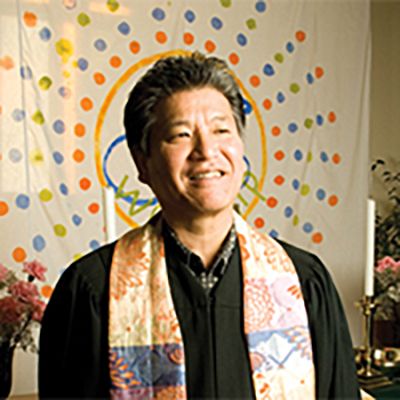 Reverend Michael Yoshii is pastor of the Buena Vista United Methodist Church in Alameda, California. The church was founded in 1898 to minister to newly arriving immigrants from Japan and for many years was a center of activity for the Japanese American Christian community in Alameda.  During World War II, Japanese Americans were directed  to mass incarceration through Executive Order 9066 issued by President Roosevelt. Most Buena Vista church members were interned at Topaz, Utah, one of the ten concentration camps set up during the war to detain Japanese Americans. Worship services were suspended for the duration of the war.   On August 10, 1988, the Civil Liberties Act was passed apologizing to Japanese Americans for the violation of their civil rights during the war.

Perceived as the “face of the enemy” during World War II, Japanese Americans were very sensitive to the similar dynamic taking place against Arab and Muslim immediately following the 9/11 attacks. The church opened its doors to Afghani neighbors and invited an imam to come speak on the Sunday immediately following 9/11 to provide a Muslim perspective on the unfolding events. The church was host to several Muslim speakers and friends during this time.

In 2009, Buena Vista launched a partnership with the Palestinian Muslim village of Wadi Foquin. Located in the West Bank just southwest of Bethlehem, the partnership has been a true interfaith friendship between Christian United Methodists and Muslim Palestinians. The partnership began at Buena Vista United Methodist Church in August 2009 and now includes other United Methodist partners, with the group calling itself the Friends of Wadi Foquin. One of the projects supported by Friends of Wadi Foquin has been the construction of a soccer field. The soccer field is built on land threatened for confiscation by the Israeli authorities. The soccer field serves as a playground for children and youth, while sending the message to the world that life will not be denied to the people of this village.