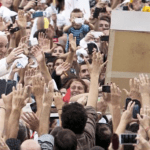 Pope Francis praised the Albanian model of coexistence between its Muslim and Christian population. In a visit to Albania, the Pope spoke at downtown Tirana addressing a crowd of tens of thousands of people. During his address, Pope Francis noted the interreligious unity in Albania saying, “The climate of respect and mutual trust between Catholics, Orthodox and Muslims is a precious gift to the country.” The Pope stressed the importance of such peaceful interfaith dynamics in a world of rampant religious extremism. “This is especially the case in these times in which authentic religious spirit is being perverted by extremist groups, and where religious differences are being distorted and instrumentalized,” he said.

In Albania, Muslims represent the majority making up around 59 percent of Albania’s population. Catholics add up to 10 percent and Orthodox Christians simply under that, as indicated by the country’s official figures.